The Case of the Perfectly Placed Stranger

Staying in a hotel during a large event, a woman felt as though the Holy Spirit was prompting her to go down to the lobby.  She didn’t know why, but being the obedient and humble person that she is, she decided to abide this marked feeling.  She went down to the hotel lobby and stood still for a minute surveying the area and the people, not sure what to do next except, “Sit“.  “Sit where?” she wondered.  A large space cut out by long couches and tables making a conference type area in the corner of the room seemed to be calling to her.  She went and sat in the corner, working on her laptop and waiting for whatever came next.

Two men who seemed to be good friends came and sat at a small table near the couch where she sat.  They began discussing deep theological ideas back and forth.  She didn’t feel compelled to do anything at that point, so she continued working and waiting.  A few minutes later, a man and his son came into the area as well.  The son, who seemed to perhaps have some level of Asperger’s syndrome, came and sat close to her.  He was talking loudly and openly with his father, who did not seem to relate to the faith-based questions from his son.  She stopped working and said hello, asking the young man if he liked to talk about faith, and he said he did.  At first, she noticed the uneasiness of his father, who seemed to be uncomfortable with his discussing faith with strangers.  When his father left temporarily, the son revealed that he and his father had a strained relationship at times.  He then began to ask many poignant and serious questions to the woman about her faith.  She then understood what her purpose was for being called to come and sit in the lobby.  She directed the son to the two men sitting nearby who were still in a faith-based conversation.  After introductions were made among themselves, the young men joined the woman and her new young friend for a chat on the couches.  Soon the father came back and noticed his son being enveloped in some important and detailed conversation about faith matters.  He revealed that he was a corporate man, and these matters were foreign to him.  She could see that watching his son with adults who took him seriously and respected him, seemed to help the father look at his son with a new perspective.  He seemed to be admiring his son’s comments and knowledge, and watched carefully as the conversation flowed easily among the four about topics that were unfamiliar to the father.

In the end, this business man extended his card and connections to the two young men and offered his help for them in the future, should they need it.  As for the woman, she understood that when the Holy Spirit nudges, He has his reasons.  It seems that through the connections and conversations, a father and son’s relationship was healed, and the others were themselves felt encouraged (as it always seems to go) by sharing faith with strangers.

As we discussed this case casually and not in the context of our Encounter with Christ, we did not form resolutions for the week.  But what I took away from this discussion, was the importance of heeding the promptings of the Holy Spirit and having the courage to act on them.  Already this week I have had an opportunity to practice this and the results were, without a doubt, only something God could have done (and perhaps for another blog, another time).

See Prayer Intentions Page and add your intentions for any special needs in the comments if you would like me to take your prayer requests to my retreat this weekend.  We will be holding you up in prayer in the chapel.

Since many have undertaken to compile a narrative of the events
that have been fulfilled among us,
just as those who were eyewitnesses from the beginning
and ministers of the word have handed them down to us,
I too have decided,
after investigating everything accurately anew,
to write it down in an orderly sequence for you,
most excellent Theophilus,
so that you may realize the certainty of the teachings
you have received.Jesus returned to Galilee in the power of the Spirit,
and news of him spread throughout the whole region.
He taught in their synagogues and was praised by all.

He came to Nazareth, where he had grown up,
and went according to his custom
into the synagogue on the sabbath day.
He stood up to read and was handed a scroll of the prophet Isaiah.
He unrolled the scroll and found the passage where it was written:
The Spirit of the Lord is upon me,
because he has anointed me
to bring glad tidings to the poor.
He has sent me to proclaim liberty to captives
and recovery of sight to the blind,
to let the oppressed go free,
and to proclaim a year acceptable to the Lord.
Rolling up the scroll, he handed it back to the attendant and sat down,
and the eyes of all in the synagogue looked intently at him.
He said to them,
“Today this Scripture passage is fulfilled in your hearing.”

Reflections from the group
and the eyes of all in the synagogue looked intently at him…
The people were being transfixed by Christ, wanting so much to see the prophesy fulfilled.  They were watching and wondering, “Is he the one?” For our upcoming retreat, I want to be intentional and allow God to speak to me through the scriptures.  I pray that my eyes and my heart are open.
He has sent me to proclaim liberty to captives
and recovery of sight to the blind,
to let the oppressed go free,
and to proclaim a year acceptable to the Lord…
Are we the “blind?” Often we are the ones who cannot see, setting our eyes on all the wrong things in life.  Our focus is often askew to things that either don’t matter much or our own pride.  We can be blinded by relying on ourselves too much; our own self-reliance and even become a “martyr” of sorts among those we love and serve the most.  Am I doing things for people when they didn’t ask me to do them?  Do I then get upset when they don’t appreciate what I have done?  We can examine our acts of service in terms of our intentions, deciphering if we are actually self-serving at times; looking for appreciation or recognition, or truly wanting to be a good servant and spend my life for Christ. When we serve with the right disposition in our hearts, we are truly proclaiming the gospel to the world around us.
Today this Scripture passage is fulfilled in your hearing…
The fulfillment of the prophecy is also fulfilled in us when we are anointed at our baptism and confirmation.  We can be part of the blind when we become subject to oppressive spirits that bring us down on ourselves or others, but in Christ we are set free.  There is such a spiritual battle being waged around us and in us all the time.  When we enter into the mystery of the gospels together it brings the word of God to life, connecting us to one another through Him. 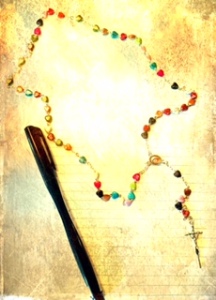 3 thoughts on “A Perfectly Placed Stranger”