I drafted this article in the wake of the horrific Stoneman Douglas shooting in Florida, and for some reason I kept it in draft because so many souls are hurting and looking for answers, and God wants us to know He will never forsake us (Deuteronomy 31:6).  Since first drafting my thoughts, I received three inspirations that helped me reconcile what I wanted to impart spiritually about this situation.

One reaction that contributed to my response was a message many loved ones on Facebook which had been “liked” several thousands of times regarding the questions existence of God in these horrific circumstances, printed on a T-shirt. 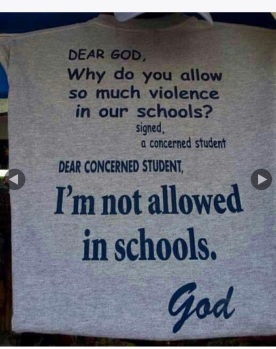 The message being that God cannot help where He is not wanted. He is a gentleman who prefers to be invited, and gave us free will for the reason that He loves us so much; He isn’t a bully who forces Himself on people.  Although our country seems  to have lost its sense of being founded as “One Nation, under God” by not permitting prayer in public schools, I am not sure we can say that God wasn’t there that day this tragedy took place; certainly evil was there, but it’s important to convey that God doesn’t forsake us when evil is abound.

Evil Where There Is Good? A common Mistake.

Having sent our kids to Catholic Schools, whenever there is an issue with the students, teachers, staff or administration, I always hear this comment “WELL THAT SHOULDN’T HAPPEN AT A CATHOLIC SCHOOL!”  What?

Here are some of my responses:

Once during mass the priest said “There is a church on the hill and bar in the valley. Where is the devil?” Everyone naturally said the bar.  He said “No, he already has the people in the bar, what he wants are the people at the church.”  This is not to say literally if you go to a bar the devil owns you.  It is also not saying that people in church don’t sin; like it is said the church is a hospital for sinners, not a museum for saints; however, the point is if evil wants to take away the good, it would go to where it thought the source of that good was.  A place where people are trying to turn away from evil, and seeking forgiveness, and praying to a God who loves them…TOGETHER (which is powerful). See below for a link to an article in Aleteia about the astonishing battle of good and evil during the Holy Sacrifice of the Mass.

Making A Memorial Out Of A Mess

A final confirmation of what I felt I needed to say came for me when I picked up our local Catholic paper this morning. I read an article on the Church’s Lenten observance in one church located near the high school in Broward County, Florida, where parishioner Gina Montalto was among the deceased on that awful day, and many other parish families suffered injury from this violent act. And down the street from this parish–Mary Help Of Christians Catholic Church–where Lenten Stations of the cross are being held weekly as memorials to those involved in the school shooting,  is a Baptist church, a Methodist Church, and other churches where families strong in faith were affected by this evil too, and they are hurting.

God is everywhere.  I don’t believe He abandoned that school that day or any other; there were most assuredly people who loved God and were faithful to Him at that school too.  And evil can lurk just as much in a Christian school or a church because the battle of good evil resides there too; even more so.  The presence of evil in this world exists not because of the absence of God, but because of the EXISTENCE of God and His goodness and power being rejected by Satan, who didn’t like God being so good, and wanted that power for himself (Isaiah 14:12-14, 1 Peter 5:8-9).

But these hurting families of the faithful are turning to God, Who is their consolation.  We won’t hear about that in mainstream media where we will only hear souls (that are themselves lost and hurting) say that God doesn’t exist, so we will have to seek it out for ourselves on media sources that highlight hope and faith.

As the T-shirt is trying to convict critics, if we shut God out we cannot throw blame at Him or the lack of His existence when things go wrong, conversely where there is evil, grace abounds all the more (Romans 5:20).  We cannot yet know where God defeated evil that awful day, but as with 9/11, the stories of the lives that were saved (and miracles that occured despite the horror) filtered out over the months that followed and were sealed by the proof of providence prevailing over the darkness; all marked by a standing iron cross at the site of ground zero, which I have seen myself.

every day sources of grace